This guest post comes from Marcela Colmenares ’13, who is currently working in Washington, D.C. at the Center for Democracy and Development in the Americas.

A couple of days ago, my hometown of Caracas, Venezuela woke up dressed in the perfect Halloween costume: Its walls were plastered with posters depicting three faces that everybody knows, with the words, “RECOGNIZE THEM. The evil trilogy. They take away your light, they take away your food, and they take away your peace. Enough with the violence,” written underneath. Coming out of darkness and covered in shadows were the faces of Venezuela’s three major opposition leaders: Henrique Capriles Radonski, Leopoldo López and Maria Corina Machado. 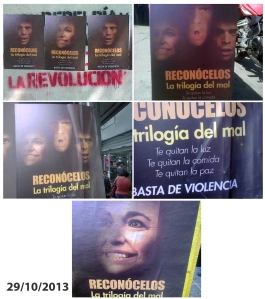 Seeing the dressed up city, I instantly felt transported to a chapter of 1984, or even the beginnings of the Nazi regime, where propaganda indoctrinated the populace and the worst days were still ahead. Witnessing history repeat itself right in front of me, I felt scared. I remember reading The Nazi Seizure of Power in Modern Democracies and telling myself that if I ever faced such a reality I would do something about it. That day is here, yet it is hard to know what to do in a country mired in propaganda and indoctrination, with the truth hidden in plain sight.

This truth includes a number of not-so-fun facts: The current Venezuelan government, led by Nicolás Maduro, is a continuation of Hugo Chavez’ legacy. This regime is responsible for 21 political prisoners including the famous case of Judge Afiuni; the monopolization of the media; making Venezuela one of the most dangerous countries in the world; and a backwards economic policy marked by arbitrary expropriations, hyperinflation and overwhelming scarcity. In short, in 10 years this government managed to (mis)spend roughly eight times the amount of money needed to reconstruct Europe after World War II without positive results.

As a Kenyon alumnus, I write to all of you because I would like to count on your solidarity beyond the Hill. I graduated in May, and ever since that day I have been working closely with the organized Venezuelan opposition. Since most of you are not Venezuelans, I understand that my home is likely not one of your top priorities. Nevertheless, you all, as international advocates, are essential in preventing my country’s government from continuing to harm supporters of democracy and human rights such as Leopoldo López (K ’93, H ’07).

The united Venezuelan opposition has decided to fight an undemocratic, yet somehow legitimate, regime through democratic means. They choose to do so not only because they have strong democratic values, but also because the army supports the government. While they seek rapid, significant change, they recognize that it is easier to fight at the polls than in jail or the grave. For this fight to succeed, we need you to be aware of our reality. Never underestimate the power of international arm-twisting: free and fair elections can only be guaranteed when neutral observers demand them.

Leopoldo López, a Kenyon alumnus, is risking his life on a daily basis to fight for a noble cause. I do not have the means to change my country’s current government on my own, but I do have the means to fight their propaganda and lies, and to help reveal the truth that will hopefully be rewritten in Venezuelan history books after this regime falls. Let’s hope that the day comes soon enough.